In targeted advertising terms, Boris Johnson gives off the impression of Ben Stokes, morally dubious, fast, exciting and may single handedly win his party the campaign. Corbyn on the other hand evokes the impression of a night watchman, slow, unadventurous, yet persistent and painfully aware of his role. In what can sometimes feel like a presidential election campaign, Boris’s flash approach may seem like the superior mode of political communication, however, while Corbyn may come across like an old spoken word poet reeling off policies at beer stained Labour club, his lead guitarist, Momentum, are the media equivalent of Jimmy Page. Modern, experimental, and the word that has never been associated with Conservatives – cool.

The cult of Boris is pushed strongly on social media. Most laughable are the series of four photo’s, targeted at 18-34 year olds, that show the PM in James Bond style action shots. Labour advertise just one video featuring Corbyn where he talks very seriously about the North Yorkshire floods. The majority of ads posts policy information accompanied with drab images. 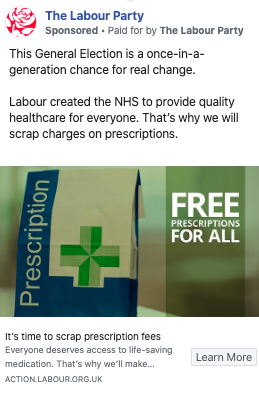 This informative but dull advert has been a cornerstone of the Labour Campaign.

Corbyn, with 2.1 million Facebook followers, flanked by Momentum, with 259,000, has by far the largest social media following among political rivals. In turn, it is through these avenues where his image as the countries next PM leader has been firmly pushed. This marks a significant deviation from targeted advertising. Most confidently the tone of Corbyn’s campaign can be found through the content and narrative of Momentum.

Whereas the Tory’s come under scrutiny for being overly creative with social media, demonstrated after they changed the Conservative Twitter page to ‘Fact Check UK’, Momentum have no such restraints, their content reading like a punk printing press with 20 x more followers than Jo Swinson. A good example was shown during the referendum debate, where they created a very well-produced street fighter themed video called ‘finish him’ that showed Corbyn saying he would give Johnson ‘A Christmas Carol’ to ‘understand how nasty Scrooge was’.

The style of the video is humorous, slick and built to go viral. The power of shareable content should not be underestimated. Were the video to go viral it would have the power of convincing voters that Corbyn was the debates undisputed champion. Amelia Tait, in the New Statesman, argued that ‘we actually elected a meme as president’ following mass dissemination and consumption of Trump memes, such as Pepe the frog. Judging by the quality of the above content, Momentum may threaten to have the same effect in the election of Corbyn.

Whereas Corbyn seems slow to pack a punch, Momentum do not hold back, bowling to the Conservative’s Ben Stokes with the spin and trickery of Nathan Lyon. They resurrect, through their content, embarrassing moments for the Prime Minister constantly politicising the goings on in the campaign. One video, shows an expose style conversation between Johnson were he provides the number of a journalist to his friend who promises to assault him. This harrowing audio brings one of the most crazy episodes in Johnson’s past back into public memory with the clip being shared 2800 times on Facebook. Another video presents a montage of Johnson’s favourable comments on Prince Andrew immediately spinning the Dukes’ condemnation to attack the Prime Minister. The video is accompanied by a trap beat demonstrating the ability to effectively attack the PM in a way that shares a style and understanding of youth culture that will appeal to voters between 18 and 24. The right cannot tap into this zeitgeist. There have been strong ties between subcultural movements and left wing politics from the sixties onwards. The New Left and Punk are just two of the major creative movements that identified themselves with the left and thus we shouldn’t be suprised when Grime artists like Stormzy and Wiley publicly endorse Corbyn.

Momentum are very aware of using social media to enhance their narrative, disruptive and electoral power. Their website actively seeks individuals to join their ‘Digital Army’, that attempt to ‘make key stories go viral’. They write ‘Boris may have billionaires but we have people like you with powerful stories and social media savvy’. The ‘Videos By The Many Challenge’ urges the creation of voter led content explaining what someone is passionate about and why they are voting Labour. While as a group Momentum has 40,000 members, the millions on Facebook and Twitter gives them the power to demand and receive this content.

While the Labour’s targeted adverts are bland and informative in contrast to Johnson’s flashy appearances, Momentum serves to make Corbyn look sexy. Social Media is built on a culture of memes and GIFS. Saatchi has not yet won an online election campaign as they did during the Thatcher years. Out of Labour and Conservatives, Momentum seems by far the most comfortable spinning stories with a youth culture makeover. In reaction towards the Conservative Fact Check UK joke, that read like a prank some ‘legend’ would make on the last day of sixth form,  he asserted that ‘no one gives a toss about the social media cut and thrust’. If Corbyn get his way on December the 12th, Momentum and the rest of the Labour Party will likely disagree.