I would like to write a letter to explain how the President appears to have transferred nationalism towards the United Kingdom. This sense of Britain is delusional. Most effectively this can be shown through delegitimising Trump’s major British supporters as either disingenuous or fame oriented. To articulate the real view of Donald Trump I enacted 17 of my own interviews to explain what Trump has done for both Americans and Britons.

First, I have to explain what it is like being British and growing up with the United States. From the moment you are born you are bought up as an Anglo-American. In the first 7 years of my life the Simpsons, Lion King and Jurassic Park were three of my imagination’s most important building blocks. I live by the River Thames and at parties between Putney Bridge and Hampton Court you would hear American Music; The Pharcyde, A Tribe Called Quest, Parliament, Kendrick Lamar. The outfits would be North Face, Nike and Patagonia. At home on Sundays we played Frank Sinatra, Sam Cooke, Bob Dylan and Nina Simone. From the age of 14 to 16 I was obsessed with the Sopranos. From 16 to 18 it was Mad Men. My school was founded by Queen Elizabeth the First 222 years before American independence. The British education system is far more concerned with America than with Europe. At 16 we studied To Kill a Mockingbird and the American Civil Rights Movement. At 17 we studied The Great Gatsby. At 18 we studied the American Political System. It is therefore natural that Britons care deeply about the state of America. 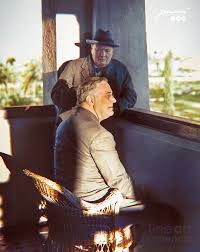 Donald Trump believes deeply in the special relationship. Trump’s mother, Mary Anne MacLeod Trump, was born in the Outer Hebrides of Scotland. Trump reintroduced the Churchill bust, that had been replaced during the Obama administration with one of Martin Luther King Jr. Beyond speaking to Vladimir Putin, the most humbled Trump has ever seemed is when attending Buckingham Palace for the Royal Banquet, describing the Queen as a ‘great great woman’, Prince Charles as ‘so good so good’ and Harry as a ‘really fine young man’ adding ‘I think the whole family is really terrific’.

Orwell argues that transferred nationalism allows the individual to be ‘more vulgar, more silly, more malignant, more dishonest – than he could ever be on behalf of his native country, or any unit of which he had real knowledge’ adding ‘transferred nationalism, like the use of scapegoats, is a way of attaining salvation without altering one’s conduct’. I would argue that Trump’s adoration for the mother country seems like a misplaced attempt to inflate American nationalism. This can be found through Trump’s conduct with British peoples and policy decision’s such as during Coronavirus when Trump banned travel from all countries aside from the Untied Kingdom. The problem is, when we inspect Trump’s British connection, contacts either seem contemptuous towards the President or significant purely through association with Trump.

Trump’s most visible connection with Britons are Boris Johnson, Piers Morgan, Nigel Farage, Katie Hopkins and Raheem Kassam. Two of these have provided strong and damning condemnations of President Trump. Nigel Farage is keen to manipulate Donald Trump for political gain, whereas Katie Hopkins, one of the most hated peoples in Britain, and Raheem Kassam, virtually unknown in this country, are making careers out of supporting Trump.

Trump continually attempts to align himself with Boris Johnson. He has repeatedly referred to Johnson as ‘Britain Trump’. When Johnson won the party leadership election Trumps said, ‘a really good man is going to be the prime minister of the UK’. Speaking to Nigel Farage in October he wrote ‘Boris is the exact guy for the times. If you and he get together you would be an unstoppable force’. Boris Johnson, when he wasn’t shackled by the need to secure a free trade agreement, described Trump as an individual of ‘stupefying ignorance that makes him frankly unfit to hold the office of president of the United States’.

When Trump visited Britain for the State Banquet Piers Morgan was given an exclusive interview where they sentimentally remembered Trump watching the coronation in 1953, suggesting that the 2019 Royal Banquet may have been one of the greatest moments of his life. Despite these intimacies Piers Morgan has now been unfollowed by Trump on Twitter following the former News of the World editor’s description of Trump’s handling of the Coronavirus as ‘terrible’ showing a ‘complete inability to pivot to the kind of leadership you need in a crises’.

Nigel Farage’s relationship with Donald Trump, although far more genuine than Johnson or Morgan’s feels somewhat exploitative with Farage using Trump as a platform to amplify his political strategies and goals, getting Trump to support a Brexit situation that the President doesn’t understand. Farage’s October 2019 interview with Trump watches like a fraudster who beams like a Cheshire cat, talking about the Queen to an elderly couple while they unknowingly give their bank details to someone who plans to empty their bank accounts. ‘How good is Prince Charles?’ ‘Great guy a really good guy’ ‘great isn’t he! Sign here please. Yes, and what about Queen Elizabeth?’ ‘oh, we really had a moment. A really good time. (nods) Really good’.

Katie Hopkins and Raheem Kassam are quite clearly aligning themselves with Donald Trump so to enjoy the fame that neither of them has ever enjoyed in the United Kingdom. During the Trump presidency both have become regular figures on Fox News seemingly to act as representatives of British public opinion. Katie Hopkins, despite being well known through shows like the Apprentice and Celebrity Big Brother, has been politically insignificant before the association with Trump. Raheem Kassam, formerly Farage’s chief political advisor, was virtually unheard of in the British media. His first performance that gained attention, beyond a Breitbart interview with Tommy Robinson, was the discussion with Newsnight about visiting Trump following his election victory, unsurprisingly his entire media presence seems to be an attempt to provide the illusion of British support for the Trump presidency. Most Briton’s have never heard of Raheem Kassam.

Trump’s transferred nationalism cannot be found at any of the places it claims to be. Boris Johnson thinks he is an idiot. He has broken up with Piers Morgan. He is left with an increasingly irrelevant Nigel Farage and, in Katie Hopkins and Raheem Kassam, two fringe characters of the British media whose newfound fame seems to be based on the combination of supporting Donald Trump and the false notion that they are representative of British opinion. As for the Royals, Trump has confidently removed the United States from the Paris Climate Agreement which Prince Charles did so much to create. Trump, along with Kassam and Hopkins, is fooling voters into believing that he is a friend of the United Kingdom.

When asked about memories of the Trump presidency the failure of COVID-19 was the most frequent answer. Some felt the Trump presidency had been destroyed by mismanagement of COVID-19. Ed Fernyhough said ‘Until COVID-19, the Trump Presidency was going better than I initially thought it would… however his management of COVID-19 has been a catastrophic failure’. Tom Evans wrote ‘I’m morbidly delighted that, along with other populist leaders throughout the world, COVID-19 has revealed the true staggering extent of their incompetence in a way that will hopefully translate into electoral repercussions’. Louis Hogan said ‘how he emerges from COVID-19 will be his lasting legacy’.

Trump may have ruptured Britons view of the Republican Party. Max Condon wrote that apart from John McCain and Mitt Romney, Republicans appear to have lost all credibility. Edward Stevens wrote ‘because the House of Representatives is controlled by the Republicans. The president is above the law’.

The strongest consensus amongst interviewees came when asked how the Trump election had influenced behaviours within British communities. It was argued that Trump had made Britain more racist. Geoff Cruikshank said that Trump had ‘emboldened racists, Tories and fence sitters as the new normal absolves lesser evils’. Holly believed that social equality had been sacrificed for economic prosperity. Servane Mouazan wrote ‘it has normalised obnoxious attitudes and racism’.

Interviewees did not revise for these answers. These are normal people describing their experience of the Trump presidency. These views are far more representative of popular British opinion than Nigel Farage, Raheem Kassam or Katie Hopkins. Trump has damaged our country. His transferred nationalism knows no roots. It is time America realise that they need to vote for a president who can do justice towards the special relationship. Do not believe Trump’s good words about Britain. Disregard British supporters like Hopkins and Kassam that pretend to be representative of British public opinion and gain all significance through support of Trump. Instead remember how Trump has failed his nation and hurt British communities.